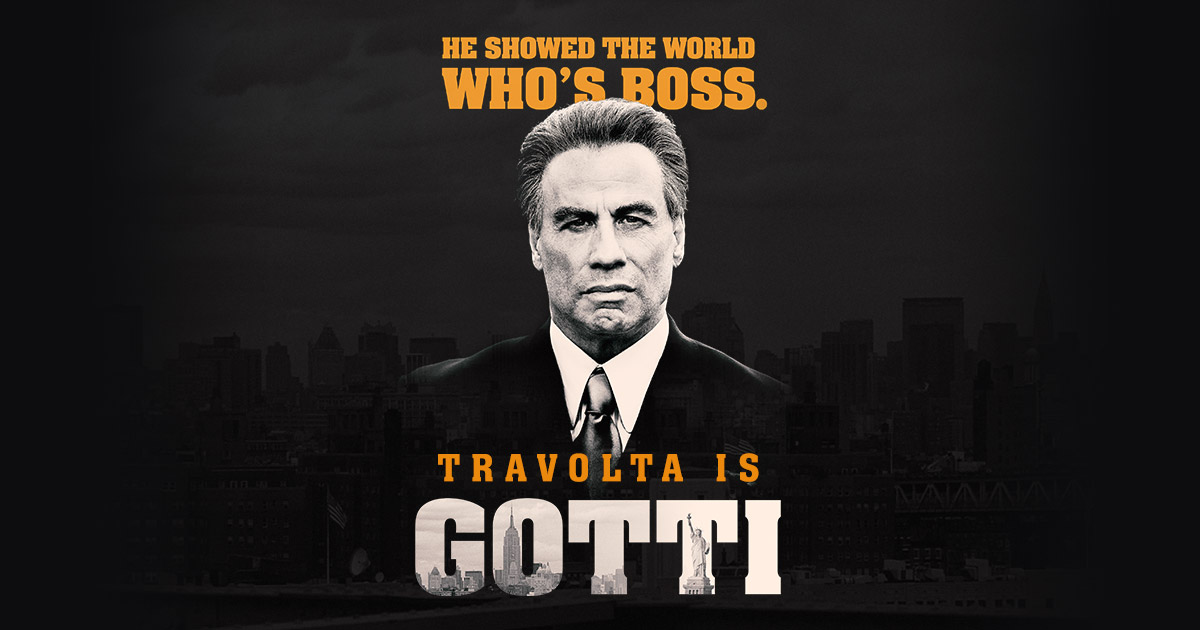 "John Gotti rose to the Top"

Gotti is based on the life of New York's Mafia Boss John Gotti.

The film is very good as it depicts the journey John Gotti (John Travolta) took as head of his Bergin crew, through to the unlikeliest rise to become the Boss of the Gambino Crime Family in the 1980s.

The major parts of the film is a perfect mirror-image of the most infamous and memorable moments of John Gotti's life - mostly because of the rise of the news interest he created around himself, and the popularity of the 'breaking news' format on American television.

Those 'moments' are the court cases which earned him the news headlines - 'The Teflon Don' as he [for a time] always walked-out of court due to a lack of evidence, but in truth members of the jury and any witnesses who dared to cross John Gotti, were either bribed or threatened into not testifying in court.

The scene were John Gotti is accompanied by his wife leaving court is asked about the job her husband does and her reply was, "He provides," which is a classic line, but this is what a Mafia wife does, stick-up for her husband, because as the saying goes, as we hear many times in the film as well as within Mafia circles, "This is the life we choose."

"This is the life we choose," means that you have to face-up to the highs and lows of this [Mafia] life. You are outside of the law, so any disputes whether petty ones or more serious one, in the end often leads to Mafia people getting whacked or face life-sentences incarcerated.

Though being in the Mafia can be very dangerous as the core of the Mafia code - apart from keeping your mouth shut and don't cooperate with the authorities especially the police - is family is everything.

Keeping everything in the family ensures security, especially when the FBI comes knocking.

The film shows family life and the fact that John Gotti's wife Victoria DiGiorgio (Kelly Preston), made a point was the fact that when John Gotti was at home as the family man, he would-be under the peck-and-call of his wife barking orders, like emptying the bins.

But outside of the family home he was the Mafia Boss, who no-one crossed as he was ruthless in getting his own way and keeping the Gambino crime family together.

The other iconic scene in the film was the slaying of John Gotti's predecessor Paul Castellano (Donald John Volpenhein), which is harrowing and exactly acted the way it was done - outside of the Sparks Steak House in Manhattan - New York.

In the Mafia it is forbidden to whack the Boss of a Crime Family, so John Gotti took a very risky step, which could have been his demise as well as his family.

However, it proved to be the making of him and he eventually became the next boss of the Gambino Crime Family.

The film takes you to the end of the successful court case on the 2nd April 1992, that finally imprisoned John Gotti to a whole life sentence, surrendering to the prison authorities on the 14th December 1992.

John Gotti evenutally died from throat cancer while serving his tenth year in prison at the United States Medical Center for Federal Prisoners in Springfield, Missouri - where he received treatment two years prior for cancer and was moved-back to Springfield, due to the cancer returning and his health failing.

Remarkably the Gambino Crime Family is still in operation, though the American Mafia isn't as powerful as it once was, as American authorities are less corruptible as in the past.